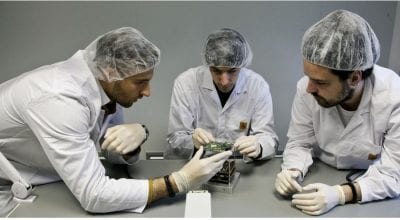 The European project FireRS (wildFIRE Remote Sensing), funded by Sudoe Interreg of the FEDER fund (European Fund for Regional Development), will have a CubeSat developed within the University of Vigo by Alén Space team. It has been named Lume-1 and aims to speed up the detection and management of forest fires in Galicia, northern Portugal and southern France.

Alén Space team will provide the services of the Lume-1 nanosatellite from the space, granting an almost immediate communication between the other participating devices.

In synergy with infrared sensors spread over the mountains, a fleet of remote control drones, analysis and simulation software and national emergency teams, the FireRS project is developed through a sequence of different stages. The process is activated at the moment when the infrared sensors installed in the mountains detect any sign of fire, generating an alarm that will be transmitted directly to Lume-1, which will generate a warning to the drone fleet that will fly out of autonomously the area in question to collect information through its thermal cameras (meteorological information, number of fire points, wind speed, soil characteristics, etc). This information will be entered into the simulation software by Lume-1 in real time so that the emergency centers can obtain a forecast of the behavior of the fire and thus increase the efficiency of their work.

Lume-1 is a 2U cubesat of just over two kilograms in weight and 30 cubic centimeters of volume that will orbit about 600 km from Earth for about 1 year. In addition, it will put into orbit for the first time the Totem device, the payload that will allow connecting the satellite itself with the other devices of the project and which, in the future, can be used as a communications hub for unmanned vehicles. To this end, the Galician Innovation Agency (GAIN) of the Xunta de Galicia has invested in this project with the purpose of facilitating the transfer of Lume-1 to the market and thus be able to exploit it for other commercial applications.

Lume-1 will be launched into Space at the end of 2018 after undergoing a stage of intense quality tests and simulations.