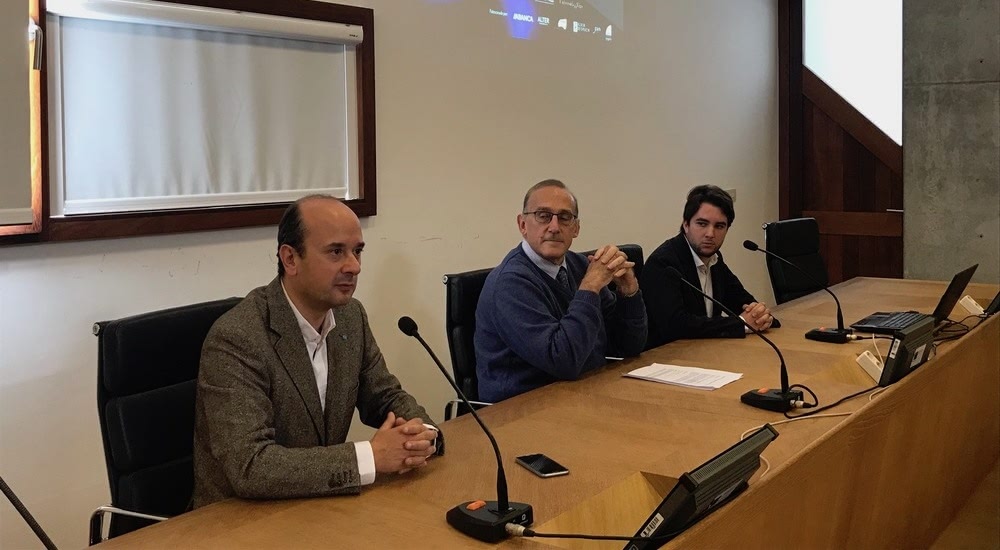 Alén Space, CINAE and the Universidade de Vigo have presented today the congress, pioneering in Spain, which will gather on November 29th the main Spanish companies and institutions from the spatial sector.

Vigo will turn on November 29th into the Spanish space capital. The official presentation of the congress New Space España 2018 has had the presence this Wednesday of Manuel Reigosa, rector of the Universidade de Vigo; Fernando Aguado, professor, researcher and coordinator of the Agrupación Aeroespacial of the former university; and Aarón Nercellas, cofounder of Alén Space.

New Space España is a pioneer congress, which under the title “Business opportunities outside the Earth”; compiles for the first time in Spain the main Spanish companies of the known as New Space, a new paradigm by which the access to space for new companies and organisations is open thanks to the reduction of costs. This process is known as space democratization.

The event, which will be celebrated at Sede Afundación in Vigo, has been organised by Alén Space, CINAE (Centro de Innovación Aeroespacial de Galicia) and the Universidade de Vigo, with the sponsorship of Abanca, Alter Technology Group, Arrow Electronics, Everis, GAIN (Axencia Galega de Innovación) and Wild One Advisors.

During the presentation event, which has taken place in the Ernestina building at the Universidade de Vigo, Aarón Nercellas, from Alén Space, has expressed gratitude to the sponsors’ supports and has highlighted the importance of the event: “For the first time, all the New Space companies, the aerospace industry and organisms, companies and institutions that drive and finance this kind of projects are reunited in Spain”.

The cofounder of Alén Space has said that “in Galicia a very potent industry has been generated in relation to the nanosatellites field” and the congress will address the New Space phenomenon from a wide point of view. “Apart from the talks, we will have three round tables. The first one will be about the New Space, its current state and its future, and how they can cooperate among the Spanish companies. Another table will be focused on the point of view of the most powerful and traditional companies from the space sector. And the last one will debate mechanisms and ways to support this kind of initiatives”, Aarón Nercellas explained.

The rector of the Universidade de Vigo has acknowledged the effort of his institution for “working in research and return society all the knowledge we generate in the form of progress”. Manuel Reigosa has revealed that there are more than 100 people registered in the event, “ with many important actors on the aerospace sector”, and has insisted on this type of events as a way of helping “the country to be there in a leading subject”. “The New Space is related to the democratization of space and is a field in which we are well-positioned, with research groups situated on top”, has commented the rector of the institution.

Fernando Aguado, on the other hand, has highlighted that “this is the first event of New Space on a national level, in which the actors of the traditional side of the space sector will also be in attendance. Being celebrated in Vigo is an acknowledgement to the work that has been made in the region, and its results in the last 11 years through the triple bond formed between the university, the research centre and companies such as Alén Space”.