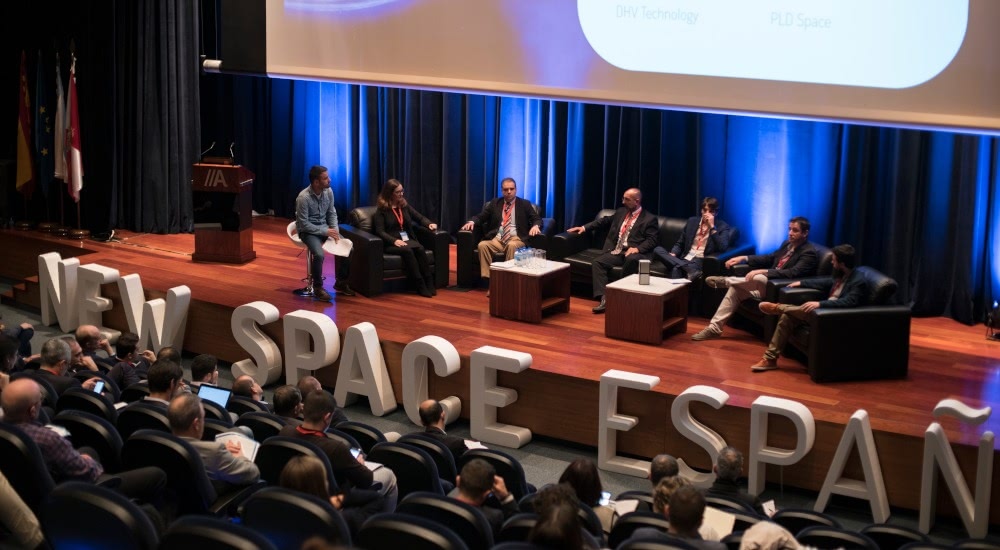 The Sede AFundación of Vigo has turned this Thursday in the meeting point of the Spanish space industry. New Space España 2018 has brought together for the first time the most important Spanish companies and institutions with the actors that have emerged in recent years from the so-called New Space. We refer to a new paradigm that opens the space to new companies and institutions through a reduction of costs and time frames, in what is known as the “democratisation of space”.

The event was organised by Alén Space, CINAE and the University of Vigo, with the sponsorship of Abanca, Alter Technology Group, Arrow Electronics, Everis Aeroespacial, Defensa y Seguridad, GAIN (Galician Innovation Agency) and Wind One Advisors. New Space España has had a little surprise in the early stages of the day. Pedro Duque, minister of Science, Innovation and Universities, and an excellent connoisseur of the Spanish and European space sector, has not been able to be in Vigo due to an institutional trip to Brussels, but has highlighted during his video speech the potential of the Spanish space sector: “Business opportunities in the aerospace field are gaining importance and Spain is doing well there.”

Pedro Duque has emphasised that “in the last decade, the Spanish space companies have doubled their global turnover, which in 2017 was more than 850 million euros, with more than 3,500 highly qualified professionals.”

With a format of presentations and panel discussions, New Space España has made a review of the new challenges the space sector is facing, under the title “Business opportunities outside Earth”. In the field of New Space, the projects of nanosatellite manufacturers (Alén Space), launchers (PLD Space), and developers of satellite components (miniaturised cameras by Satlantis and solar panels by DHV Technology) have been seen in Vigo.

The potential of New Space in Spain

Aarón Nercellas, co-founder of Alén Space, has assured at the opening of the event that “New Space is a revolution, which allows new companies and organisations access to the space, something that was previously prohibitive. The space is called to be our next ecosystem and Spain has plenty talent to have a leading role in this sector.” CEO of Alén Space, Guillermo Lamelas, has also stressed that point of view: “The market is now open to many companies and organisations that no longer see the sector as inaccessible. We are talking about a sub-sector that makes a lot of strategic sense for a country like Spain.”

Fernando Aguado, head of aerospace projects at CINAE and director of the Aerospace Association of the University of Vigo, said, “Galicia has an important role in the Spanish space sector, which includes the university, CINAE ad companies such as Alén Space.” Both Fernando Aguado and Guillermo Lamelas, CEO of Alén Space, have highlighted the imminent launch of the nanosatellite Lume-1, scheduled for December 27, within the European project Fire-RS, for the early detection of forest fires.

The proposal of creating a Spanish space agency

Eider Ocerin, director of business development at Santlantis, has launched as the “number one proposal” for the sector the idea of creating a Spanish space agency. It would be a way of encourage the aerospace industry, with the possibility of working within a “legal framework” and a “space law” specific to the sector, according to Raúl Verdú, co-founder of PLD Space.

In the light of creating an association of companies related to the New Space, Miguel Ángel Vázquez, co-founder of DHV Technology, commented, “It would be an interesting idea, in order to have a voice that brings us together, something that can generate new opportunities.”

On the other hand, Demetrio López, innovative director at Alter Technology Group, has assured that “in Spain we have now the opportunity to be the lead role in the space and not secondary actors.”

Panel discussions from the afternoon session

The panel discussións from the afternoon session have incorporated the point of view of big companies in the sector and public and private organisations regarding the funding of space projects. “The New Space is not opposite to the Old Space. We are talking about two complementary concepts and the collaboration is the way by which we all can move forward,” Pedro J. Schoch, GMV’s director of corporate development pointed out.

The conference also has had talks by Santiago Rodríguez, from INTA, who has reviewed the minisatellites projects developed in Spain since 1974; Alejandro Cardesín, from the European Space Agency (ESA-ESAC), about the possibilities offered by small satellites in missions on other planets; and José Manuel Báez, from GAIN, who has contributed to the Galician ideas regarding the aerospace sector and the initiatives that have been launched in recent years in Galicia in terms of innovation.